October is for Opals (and Tourmaline)

It’s October, and in the world of jewelry that means opals and tourmaline! Individuals born in October get to choose between two birthstones: tourmaline or opal. Each gemstone comes in a rainbow of shades and color combinations giving them nearly limitless possibilities. In fact, according to legend, both of October’s birthstones came to earth through a journey involving rainbows. Between tourmaline (whose color depends on trace elements in its chemical makeup) and opal (which diffracts light to show off multiple colors), October's birthstones offer a full spectrum of colorful gems to suit anyone's personal tastes. Take a look at some of our favorite opal and tourmaline pieces currently in our collection!

Opals have been considered valuable since ancient times. They were greatly prized by European royalty, and, until the opening of vast deposits in Australia in the 19th century, the only known source was in Slovakia. Today about 95-97% of the world’s opals come from Australia. Here we have three stunning examples of vintage & estate opal jewelry. First is a beautiful Anne Besse Shepherd cloisonné enamel gem-set bracelet. Set in sterling silver and 22k yellow gold, the bracelet is designed with various colored enamels, and is further set with pearls, opals, green tourmaline and druzy. Next is a lovely opal and tourmaline ring. The ring is set in 14k yellow gold with six oval cabochon opals and three oval cut green tourmalines. Two birthstones for the price of one! Lastly we have a fun, 14k yellow gold opal pendant. The pendant is prong set with an irregular shaped opal measuring 20 x 18 mm., and is accented with three diamonds.

In the early 17th century, brightly colored tourmalines were brought to Europe from Sri Lanka in large quantities by the Dutch East India Company to satisfy a demand of the time for curiosities and gemstones. Sometimes called the "Sri Lankan Magnet" because it could attract and then repel hot ashes due to its pyroelectric properties, tourmaline satisfied this the demand on both accounts. In the 19th century, tourmalines were even used by chemists to polarize light by shining rays into the cut and polished surface of the gem. We have a few stunning examples of this fascinating stone currently in our vintage & estate jewelry collection. First is beautiful bicolor tourmaline pendant. The 14k yellow gold pendant is prong set with an emerald cut bicolor tourmaline weighing 3.37 carats, and suspended from an 18" chain. Next is a lovely rose gold ring set with a round cut pink tourmaline weighing approximately 3 carats. We love how the rose gold complements the pink stone! We also have two different examples of tourmaline earrings. The first is a pair of two-tone gold drop earrings set with two cabochon green tourmaline suspending two cabochon pink tourmaline. The second is a darling pair of pink tourmaline earring set with four square cut pink tourmalines about ½” long. Lastly we have another tourmaline ring. This one is set with a triangular cut green tourmaline, and further set with nine full cut diamonds.

Which October birthstone are you ready to rock? Browse our full vintage & estate online collection or visit us in stores to see more opal and tourmaline vintage and estate jewelry! 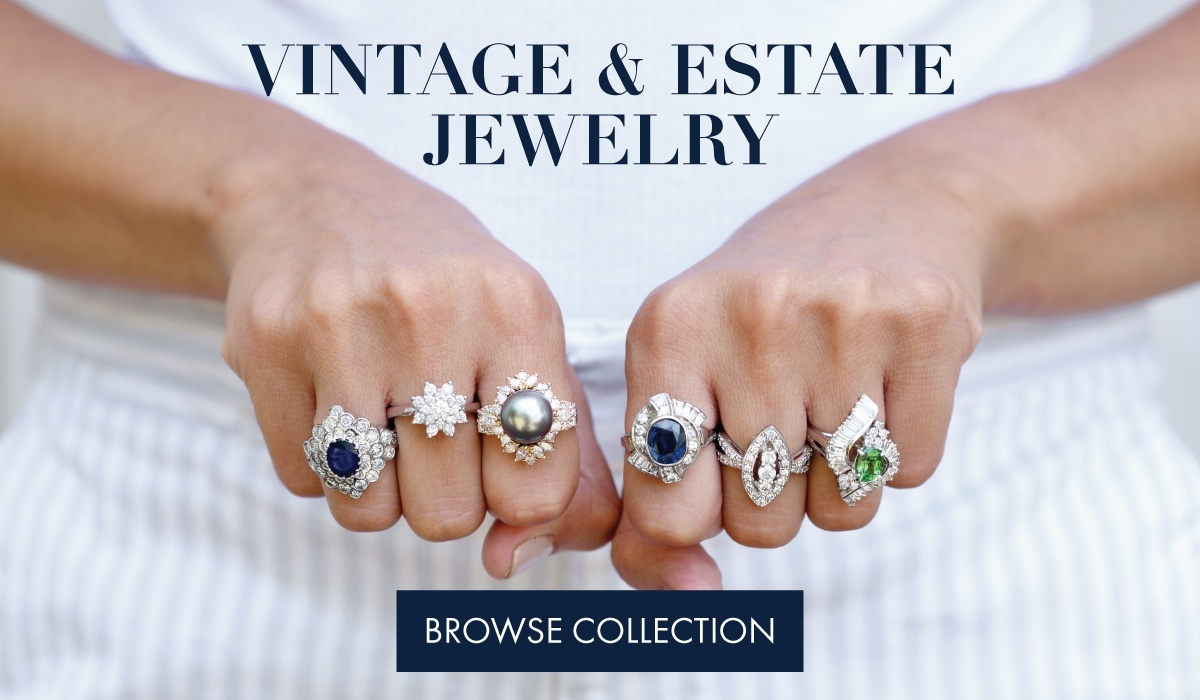